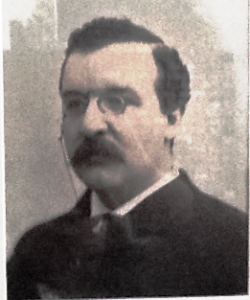 Hilborne Lewis Roosevelt, nicknamed Hilly by his wife Kate, was the builder of our church organ. He was of the Oyster Bay, New York, Roosevelts, first cousin to President Theodore Roosevelt and second cousin to President Franklin D. Roosevelt. He upset his family by deciding to become a man who works with his hands, instead of going into business or politics. Not just any laborer, he became an inventor. He held the first American patent for an electric pipe organ. His design of the electric pipe organ was on display at the Philadelphia Centennial Exposition in 1876. He also held several patents for parts of the telephone. When he began to make money building organs his family approved of his line of work. He gifted his friend, Thomas Edison, with one of his smaller organs. Edison hired a German man to play the organ all night so his workers would continue being alert while working through the night to develop the first incandescent light bulb. Hilborne’s pipe organ was the first to ever be recorded thanks to Edison.

On October 30, 1882, Martini Lutheran Church’s Organ Fund Committee was given the task to find a proper organ for the church, and to raise the funds to purchase it. When the church was built in 1868, the organ put in place was the refurbished organ from the old mother church, Second German Evangelical Lutheran Church, St. Paul’s. It had been purchased by Rev. Wyneken in 1846. Even though the old organ was completely refurbished before it was installed at Martini, it was the right time to find the perfect organ to fit in the balcony of the larger church. The first choice made by the Organ Committee was an instrument made by the Barkoff Organ Company in Pomery, Ohio. The company’s time restraints made the church committee continue with their search, and they chose a Hilborne Roosevelt pipe organ. The new organ would be made in Baltimore and delivered to the church. It was dedicated on June 20, 1886. The organ was hand-built and made in the Baltimore Roosevelt Factory on Redwood Street. The cost was $3000 and the old organ from the mother church in trade. The Hilborne Roosevelt organ, no. 329, was completely run by water-power according to an article in the Sun paper. The organ was electrified in 1905 and various stops have been added along the way. When the church relocated two blocks down the street the organ was dismantled and then reassembled in our present house of worship.

Once again the Hilborne Roosevelt organ has been disassembled. It is being completely restored- pipes, chimes, foot petals, keyboard, etc. Even the lights on the organ’s cabinet have been changed back to how they looked in 1886. This process of restoring our organ was begun after Christmas in 2012. Below are some of the pictures from the restoration.

Hopefully the work will be completed soon. Stop by and give a listen. 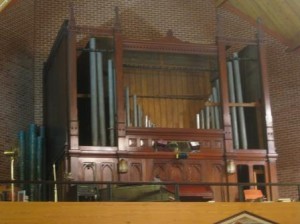 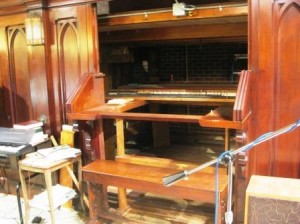 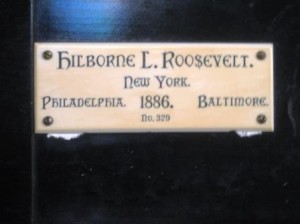 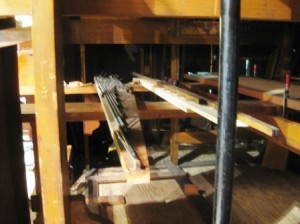