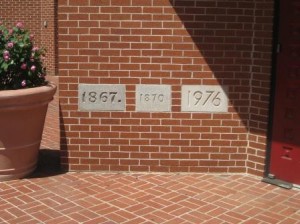 The 1867 Cornerstone was laid when the original Martini’s construction was begun. The building and its furnishings coat $27,000.

The 1870 Cornerstone is from the school building erected two years after the church in which a Christian Day School was conducted until 1896.

The 1976 Cornerstone which marked when the new Martini construction began was laid in a special ceremony on May 8, 1977.